Skip to content
Home#TrueStory: Real #Security and #Police #Robots that Kill, Tase, and Injure and some #robot #scifi

Remotec Andros Mark V-A1, a bomb disposal robot, that held a C4 bomb in it’s gripper, got close enough to the target, and then the bomb was detonated – killing the target human.

This one clearly has some modifications, including the colour. But most notably and sensational is the tubes it has near it’s gripper. Though I have no idea what they are actually for.

In terms of Robot Scifi, there are of course many examples of robots doing active duty police work, including the killing of people — for example Robocop, Almost Human (TV series), and Chappie.  And a story by Harry Harrison I recently posted here, about a Police Robot who brings justice to a corrupt and malfunctioning police department, Arm of the Law[2] .

Though to my knowledge this is one of the first examples of a real robot,  killing a human as part of its police work  Admittedly it was somewhat of a hack, but if it sets a precedent, then sending a robot in to finish “negotiations” may become a standard thing.

As I read somewhere, a robot can afford to shoot second.  Also if a robot is given a gun, or a taser with auto-aiming technology, then can probably incapacitate suspects without killing them.  Oh, but actually there already is a taser wielding police robot,  which already debuted in China [3]

Which is actually more capable than the robots in a scifi short story published in 2005 on Strange Horizons [4], which was limited to walking around looking at people, and asking to find someone honest.  Goes to show that reality is already getting pretty far ahead of even some science fiction. 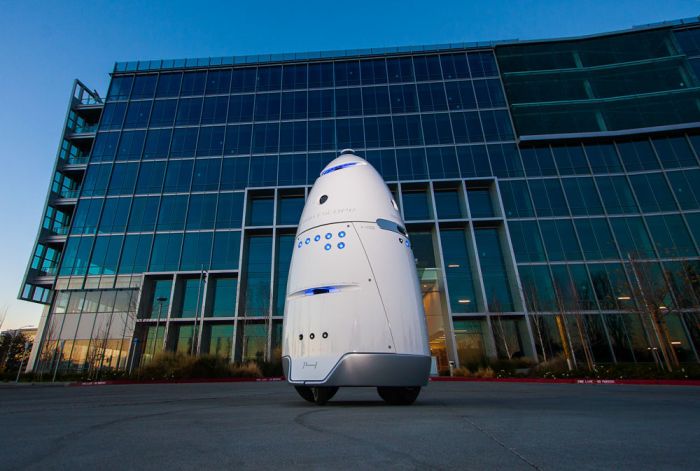 The most likely explanation is that the robot simply didn’t see the child, when it hit, and then again didn’t see the child when he had fallen in front of it.  Not so much an issue of first laws of robotics, as an issue of not having enough sensors for collision avoidance with smaller objects.   Well and these security robots are programmed by Microsoft, so …

In conclusion the era of Robot Security and Policing is upon us.