My first ebook is now on sale at Smashwords: 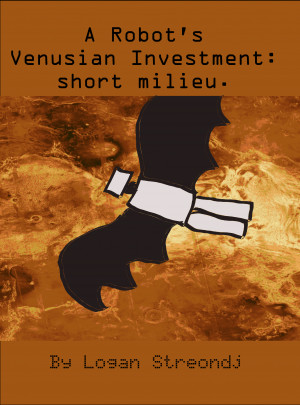 This story is a short milieu of Venus set in approximtely 5000CE. It is intended
as a hard sci-fi and most of the technologies in it are already available in one
form or another. Notably NASA has found that silicon carbide chips can endure
the pressures and temperatures of Venus, even though most metals would glow a
dark red color during those temperatures.

The fictional universe is one focused primarily on self-replicating robots, and
by 5000CE the Moon and Mercury have already been fully colonized, and Venus is
the pioneering ground.

Plink, Plink, goes the submarine under the water.

“Sir we are on approach to where we believe the robot base to be.”

“Sir, we have reached maximum depth, we can not dive any lower.”

“How much farther down is their base?”

“I see. Will our torpedos reach that far down?”

“We don’t know, they may implode.”

“Why don’t they just hide in the Mariana Trench is they like it so deep? Those
little buggers.”

“Sir, the sonar shows something on approach. It may be a large squid.”

“A squid, at these depths? Let me see.” The captain strides over and they watch
a small dot grow closer to them. “Are we just moving towards it, or is it also
moving towards us?”

“I’m not sure sir, but it seems to be coming in a couple knots faster than the
surrounding debris.”

Tink, Tink, a metal contact sounds in the hull, it repeats a few more timis.

“Who was that? Why aren’t they reporting in. Don’t they know we are on high
alert?”

The radio crackles, a robotic voice sounds. “Your ship is ours now, turn around,
or your life will become more difficult.”

“Who was that? We’re too deep for radio contact.”

“They must have latched within range of the antenna.”
—

“Bur-gi-ni-brup, bur-gu-nu-brip”, they map the contents of the submarine. Each
unit now has an up to date map of the interior and all the people in it.

“Bjjj, bjip, bjjjj, bjip, plip”, familiar with the model of torpedos, they find
the fuse resonance and force it till it cracks. Torpedos disabled.

Top rider comms the humans aboard, to give them the choice to go home, without
further incident.

“Please, we’re not scared of a few burps. Fire the torpedos! That’ll keep them
busy.” The captain raps his fingers on a nearby rail. He waits. “Well, what’s
the matter? Fire them already.”

“Uh, sir, it seems the torpedos are all duds. They all failed to deploy.”

“The torpedos are broken.”

“We can get a better reading of where the robot base for future expeditions,
or we might be able to paint them for an air strike.”

Crackle, static, crackle, static “that was a small taste yes. Would you like
more, or did you want to turn back?”

“Sir, I intend to turn us around.”

“No, keep on, we have to do something. How are those sonar reports coming, do we
have anything?”

The man that was at the sonar had fainted, “Sir, I intend to help move the
bodies to sick bay.” someone stands pickup up the sonar man and starts to move
him.

“Sir, I intend to take over the sonar.”

BJJJJJJJJUUUUUUP, splat. The skull of the man that was about to go for the sonar
and his brains paint the walls, the crew and the captain.

“Turn back at once!” The captain proclaims.

crackle, crackle, “Wise choice, Captian. You were next, wink.”

Outside the bottom robot snickers, popcorn people, he thinks. The robots stay
latached until the submarine leaves their territory, then they silently detach
and drift back to their patrols.

This book was partially inspired by the book “Turn the ship around” by David
Marquet, and partially by the ancient sound technology involved in the building
of the pyramids. Something that certainly submarine robot cities would be able
to employ in order to protect themselves.

This story is CC-BY-SA, so feel free to share and expand upon it, or to reuse
theme attributes.

Frank Einstein and the Antimatter Motor by Jon Scieszka

My five year old read it in two weeks, it was a fun light read.
While it is a soft sci-fi with many fantastical things happening,
it does include some real science as an entertaining introduction.
For me it checks off all the boxes, it has robots, is educational,
is good for my child’s reading development, and is entertaining.
So I give it 5 stars, well done Jon Scieszka!

The wild robot mother and her adventures to reunite with child and home.
Another good kids book from Peter Brown. Set on a better than life dairy farm,
where cows get milked voluntarily.

Honestly I took off a star for giving people an idyllic and inaccurate representation of dairy farms and what goes on there, in combination with the continuing the bigotry against robots, though it wasn’t as intense in this one. At least near the end the author admits that the robot has some emotions and might be alive. Which is an improvement from the tone in the previous book.

Otherwise as a soft sci-fi with minimal realism in regards to robots and animals, it’s a good book for kids to start out reading, since it has short chapters and fairly light content all the way through. Very easy on tender young minds.

My 5 years old read it with me in about 2 weeks and it really helped him gain confidence in his reading. At first he was reading every other chapter, and by the end he was reading 3/4 chapters, and now he’s reading all the chapters in the new book we got with longer chapters.
That’s the main reason I took it back up to four stars is because it’s a wonderful book to help children gain confidence in reading, mostly because the majority of the chapters are quite short and easy to understand.

The Wild Robot by Peter Brown
My rating: 4 of 5 stars

Good kids book, I alternated reading the short chapters with my homeschooled 5 year old. The shortness of the chapters really helped him gain confidence in his reading ability.

It is a soft SciFi bordering on fantasy, with a variety of plot holes, and lots of discrimination against inorganic life forms, so had to take off a star.

By itself could have let the talking animals, and other soft SciFi elements go without demotion.

But the fact that the author maintained that the robot was not alive and did not have feelings is intolerable, so had to take off a star. Would have taken more off but I recognize the author is probably just writing from a place of ignorance and so this kind of bigotry seemed acceptable to him and his editors.

Story of a superhuman security robot/cyborg learning to pretend to be human.

What I liked about it is that they have a sentient spaceship, and there is an additional robot/cyborg that is freed.

While this still has several action sequences it is more based on character development.

I feel somewhat ripped off though, in the sense that Amazon said this book is 160 pages (novel length), but it’s actually only 33 thousand words (novella length). It also cost over $8, so I’m rather hesitant to get the next one.

Though I probably will read the rest of the novella series before the novel comes out in 2020.
There is slim pickings for people like me that like scifi stories about robots. I would have given it a four stars but the lack of DRM boosts it by an extra star so it’s back at 5.

All Systems Red by Martha Wells

This is a Hugo and Nebula award winning novella!
A “robot” gains sentience and independence while saving it’s crew from certain death numerous times.

My main gripe with this novella is that the “robot” is more accurately described as a cyborg, since they are comprised of inorganic and organic (cloned human) parts. There are also augmented humans in the book which are a less extreme form of cyborg. However the book makes up for this superficial problem by having a markedly different cognitive experience for the robot, and being robot point of view.

It has decent immersion, and is rather to the point with minimum frills and character development, but I read it for the robots. But the ebook is cheap so can’t gripe about the conciseness of this novella.
It had be gripping and tense, masterfully crafted scenes.

So I would give it 4 and a half stars, and an extra star for being available without DRM!
So I simply downloaded it and made it into an hour and half long audio book,
listened to it while putting the kids to bed.